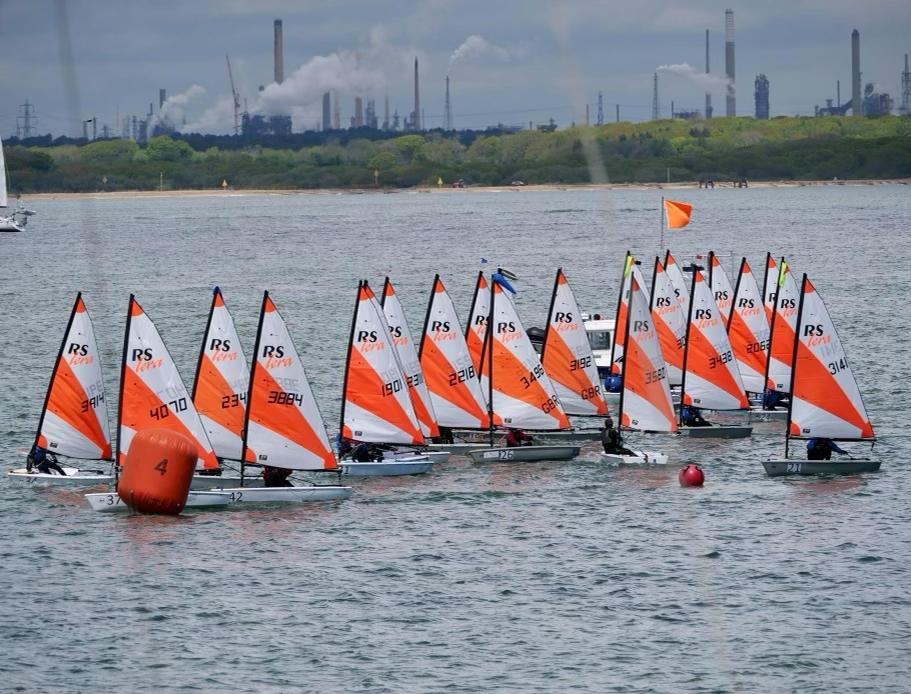 On the 15th and 16th of May, a squad of Lymington sailors consisting of Ben Gambi, Joanna Macalister, Raffy Seddon, Freya Hutchinson and Samuel Pontefract went to Gurnard Sailing Club on the Isle of Wight to compete in the RS Tera Southern Championship regatta. Most of us met up on the ferry across, all extremely excited for the coming racing. When we got there, we met up with fellow sailor Ben Anderson, who lives in Gurnard and kindly met and helped the Lymington group. Together, we took our boats down to the club and onto the beach that we would launch off. As more people came down to get ready for the day’s racing, we met up with more of our friends from different clubs.

The first day was windy: about 15 knots to start off, with the breeze picking up rapidly. Everyone got very good results in the one race that we managed to get in before the wind picked up too much. It was Ben Gambi’s first regatta, and for the challenging conditions he did extremely well. After the racing had been officially cancelled, most of the Lymington squad spent the rest of the day enjoying themselves together.

Day 2 arrived and we were all refreshed and we were all raring to go, having only got one race in the previous day. We got out on the water and managed to get three races in. The conditions were again very challenging, with the wind being 15-20 knots with fairly heavy seas. Unfortunately, Joanna broke her rudder during the third race. The team of parents onshore managed to find her a spare rudder, however unfortunately by this point the fleet had finished racing for the day. The conditions were incredibly challenging for the sailors: the last race had eleven boats racing in it, out of a fleet of thirty Tera sports. Of these eleven, three were Lymington sailors.

All of the sailors achieved very good results, with a 5th place overall being the best result, and most were personal bests for the sailors. Everyone represented Salterns SC very well. Raffy Seddon was awarded a prize from the RIB crews for determination and refusing to come in! Well done! We were all a bit disappointed when it was over, but we had a fantastic regatta and are looking forward to the Start of Seasons Championship on home water, Lymington, next weekend!

Results can be seen here: https://www.sailwave.com/results/gurnardsc/2021/Tera%20%20SPORT%20Southerns.htm

This website uses cookies in order to provide functionality and a good user experience. Find out more.